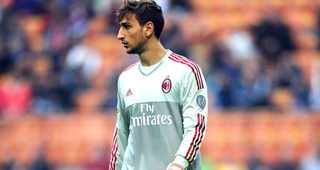 “Do we need a really good AC Milan team to make Serie A globally as arresting as it used to be?” asked Andy Brassell to In Bed With Maradona editor Jeff Livingstone earlier this month on the European Football Show. Livingstone, who recently oversaw a series on Milan soccer for the site, agreed with the sentiment and described the lack of quality in Italy over the last decade as compared to its golden age of the 90s. The question not only highlighted the struggles of one of Serie A’s glamour teams, but also how it affected the perceived magic of the league from a nostalgic and outside perspective.

Milan’s 4-1 win over Empoli last Saturday proved historic in a small but significant way: with an average age of 23.6 years, it was the club’s youngest starting lineup since 1985. The youth was no fluke: 17-year old-keeper Gianluigi Donnarumma, 21-year-old center back Alessio Romagnoli, and 18-year-old defensive midfielder (and scorer of clutch goals) Manuel Locatelli all featured in manager Vincenzo Montella’s lineups this season. With goals from Suso and Gianluca Lapadula, the win put the side in second place of Serie A for a brief moment.

Homegrown teenagers aside, the 23-year-old Suso is Milan’s breakout star with five goals and endless creativity from his left foot. His experience and travels bely his age. Signed with high expectations to Liverpool in 2010 when just 17, his skill was more often heard about on blogs and message boards than actually seen. He went on loan to Almeria in 2013 before returning to Liverpool under Brendan Rodgers for the 2014 season and made just one appearance before moving to Milan. It was presumed he would join the ranks of Liverpool Spaniards deemed not physical enough to play in the Premier League.

The meager $1.3 million transfer fee Milan paid for Suso in 2015 reflects how fast a player can go from phenom to afterthought. And this season’s success was no guarantee as he spent the second part of last year on loan at Genoa. Yet it provided Suso with the most meaningful playing time of his career til that point. Whether he was always this skilled or just needed the right environment is a debate for another time, but the last six years reflect his professional journey of going from being the next Andres Iniesta to now touted as the next Arjen Robben.

If Suso has developed an unexpected taste for goals, then midfielder Giacomo Bonaventura is Milan’s engine. The 28-year-old (the third oldest starter against Empoli) is the glue of Montella’s build up play. Signed for just over $7 million from Atalanta on the last day of the 2014 summer transfer window, he represents another Milan bargain. As much as skill, his approach makes him an invaluable figure for his manager. He admits that style of circulating the ball from side to side and nuanced approach to passing will always be overlooked for goals. But Bonaventura has his dynamic moments as well: with a drop of the shoulder and acceleration from midfield, he created Milan’s third goal against Empoli. His dribbling and decision making in transition lead to Suso’s opener against Inter two weeks ago. The goal was also notable for Donnarumma’s pass to Bonaventura.

In another world, Montella would still be the manager of Fiorentina. After all, it wasn’t a lack of results that got him fired, but a cryptically worded “lack of respect”. Up until that time, the 42-year-old led Fiorentina to three consecutive fourth place Serie A finishes while gaining plaudits for a possession based style. It was this combination of results with an entertaining style that made Montella the hottest young manager of Serie A. Lead by midfielder Borja Valero, Fiorentina was described as being the most Spanish side in Italy during that era.

In hiring Montella, Milan owner Silvio Berlusconi promised the same combination of style and substance. And while Montella relies upon a 4-3-3 formation at Milan instead of the 3-5-2 system he built his name upon, the principles of build up play are similar. Milan rely on center backs Romagnoli and Gustavo Gomez to begin play out of the back, with Locatelli relieving pressure from the duo. Juraj Kucka is far from the most technical midfielder on the squad, yet his physicality is essential alongside the nuanced Bonaventura and Locatelli in bringing balance to the midfield trio (Kucka will often mark opposition playmakers as well). Suso and M’Baye Niang provide penetration from the wings, and Bacca the goals. Milan’s insistence in developing play from the back was on display against Inter’s first half press. Montella has also developed a pragmatic side. In a draw away at Fiorentina earlier this season, Milan had just 38% possession.

There must be a measure of appreciation for last season’s manager Sinisa Mihajlovic, who was hired in June and gone by the following April. Wins and losses aside, it was Mihajlovic who promoted a then 16 year old Donnarumma to the senior team, handed him his debut, and made him a permanent starter midway through the season. Mihajlovic also gave 18-year-old Romagnoli his Milan debut at center back. Locatelli was promoted to the senior side last season. In fact, again taking place in this alternative soccer world, if Niang had never been hurt in a car accident midway last February, Mihajlovic may still be Milan’s manager (this also shows the importance of Niang, who began to fulfill his promise alongside Carlos Bacca in a 4-4-2 last season, and now plays on the left side of the attack in Montella’s 4-3-3).

2015 also marked the first time in 60 years that neither Milan nor Internazionale qualified for a European competition. Milan finished 10th and Inter finished 8th that season, a combined 67 points behind first place Juventus. This season’s Milan derby showed glimpses of an identity for both sides: Inter, now under Stefano Pioli, played with an intensity often missing under Frank de Boer; Milan tried to pass their way out. And currently sitting just four points back of first place Juventus, we are experiencing, in real time, the answer to the original question of Milan’s importance to the overall success of Serie A.