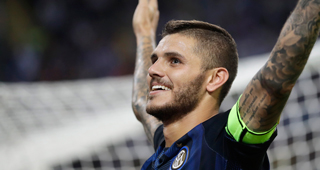 Internazionale matches this season have followed a familiar rhythm of going down a goal and getting bailed out by Mauro Icardi’s late heroics. His Serie A leading six goals in five matches have come at the following times: an equalizer in the 72nd minute against Palermo to salvage a draw, goals in the 77th and 91st minute against Pescara, a 68th minute goal and a 78th minute assist against Juventus, and relatively relaxing 10th and 17th minute goals against Empoli.

This is the Icardi we were promised when Roberto Mancini named the 22-year-old club captain last season. After tying Luca Toni for most goals scored in Serie A in 2015 as a 21-year-old, his struggles under Mancini the following season with the weight of the armband led many to wonder what happened to Icardi. Such expectations were cultivated at an early age when by folkloric accounts, he scored some 500 goals in a youth league in the Canary Islands. A battle between Liverpool, Arsenal, Real Madrid and Barcelona for the 14-year-old phenom ensued, in which Barcelona won.

With no clear path behind Messi, David Villa, Alexis Sanchez and Pedro in front of him, Icardi left for Sampdoria in 2011 in search of playing time. Icardi found a home within the technique and physicality of Serie A. He broke into the senior team as a 19-year-old, and broke out with four goals against Pescara months later. And in a moment of foreshadowing, Icardi scored against Juventus in Sampdoria’s final match of the year before moving to Inter that summer in what he called his dream move.

Icardi could have made a name just from his performances against the Italian champions. In Inter’s September match against Juventus, Icardi not only scored the game tying goal to continue a streak of scoring every 64 minutes against the side but also assisted the match winner to Ivan Perisic. It was the Inter’s first home win against Juventus since 2010. He remarked how Juventus are his favorite side to score against before admitting Inter need to show the same level of quality in every match to retrieve past glories. Symbolically, any rebirth would be lead by the young Argentine captain.

A striker from Rosario, Argentina who moves to Spain at a young age and develops his goal scoring talents at La Masia: this is the familiar story of Messi, but also of Icardi himself. Of course, the significant difference is that Messi stayed at Barcelona, and with Icardi’s success this season, one may wonder what could have been had he stayed with the Catalan club. But Icardi harbors no regrets of leaving Barcelona for Sampdoria six years ago. Besides, his style is more Gabriel Batistuta than tiki taka.

Amidst rumors of Cesare Prandelli convincing Icardi to play in the Italian senior side, he pledged his allegiance to Argentina, saying he feels Argentine and he’s “always dreamed of wearing the shirt”. Icardi presents an interesting contrast to how Messi is perceived in his homeland. Icardi left Argentina for Spain when he was just six years old and developed in Spain and Italy. He has a lower profile than Messi, and only played in one international match, but he has escaped the criticism that has dogged his national team counterpart who spent his youth and adult life developing his game on another continent.

And Icardi’s off field issues has overshadowed his play so far in his short career, the most infamous example being Icardi’s marriage to ex-Sampdoria teammate Maxi Lopez’s wife. Diego Maradona responded that Icardi was dead to him, as the public sided with Lopez. On the field, he and Dani Osvaldo famously argued during a match two years ago that eventually lead to Osvaldo quitting Inter. And despite naming him captain, Mancini benched Icardi later that season for criticizing a lack of service and admonished him for not celebrating with Inter supporters after a goal after Icardi called supporters “pieces of shit”. He does tends to fly close to the sun.

He has featured in the Argentine senior side only once before, in a 2013 loss against Uruguay in a World Cup qualifying match. The strategic assessment is that Argentina played Icardi to tie him to the country in lieu of Italy, while the cynical would point to the Lopez scandal as the reason for his sole appearance in three seasons. More recently, he was deemed a surplus for Argentina’s Copa America Centenario side last summer, and again in recent World Cup qualifiers. But there is no denying Icardi at the moment. In total, Icardi has scored 53 goals in 64 Serie A matches. Comparatively by age 23, Sergio Aguero had 74 goals in 175 league matches. Gonzalo Higuain scored 82 in 162 matches (and Messi had one million - actually 119 goals in 177 matches by the same age).

Walter Mazzarri observed after Icardi’s return match against Sampdoria in 2013 that he had all the skills to be a complete forward if he matured from a personal standpoint. And early this season, we’re beginning to see the player he can become, not just as a poacher but a captain who inspires his teammates. And after Inter turned down a rumored $50 million bid from Chelsea last summer, Icardi is on pace to follow Javier Zanetti and Diego Milito as the next Argentine legend at the club. And if he keeps up his scoring rate, he may even have an opportunity to become one in his home country as well.